The Unsung Heroes: Student-Athletes Make an Impact Off the Field and Court 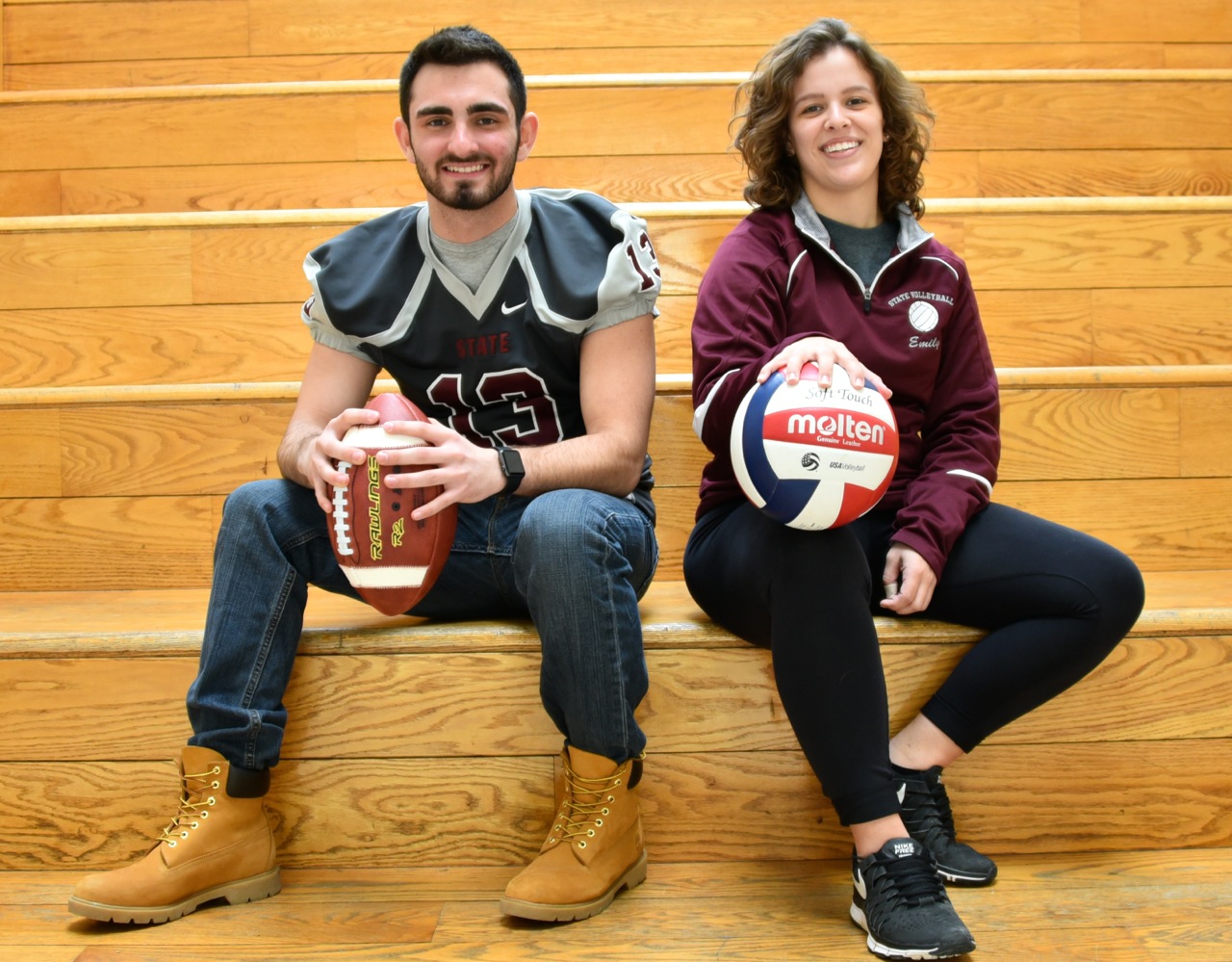 For many State High athletes, determination and hard practice are the keys to a successful season. For others, their programs’ success is fueled by much, much more. It’s driven by how the players can bond together as teammates for a greater cause and make a difference in their school and in the larger community.

We caught up with two State High athletes—football player Vinnie Albegiani and volleyball player Emily Dry—who are making the most of their student-athlete experiences to make a difference in the lives of others.

It was the end of the State College Area High School football team’s practice, and Vinnie Albegiani was about to fire up his teammates.

They gathered around on the Memorial Field artificial turf, all eyes on him. Was he going to exhort them to crush their next opponent? Urge them to step it up?

No, he had something better to say.

Albegiani, the third-string quarterback and designated placeholder, became the star of the moment, as though he had tossed a touchdown bomb. He reported that the team’s food drive, an effort he conceived and led, had delivered 387 pounds of groceries to the State College Food Bank.

“He announced that, and the guys went nuts,” recalled Coach Matt Lintal. “It was the equivalent of us winning a big game.”

The celebration last November, capped by Albegiani’s leading the traditional chant to break, will endure as one of the senior’s favorite memories from his time as a State High student-athlete. Though he didn’t play much, he turned in as successful a season as the Little Lions, who finished 9-4, winning the District 6-9 Class AAAA title and advancing to the PIAA Class AAAA quarterfinal.

In addition to directing the food drive, Albegiani scored a running touchdown — on fourth and goal no less — persuaded a friend not to quit and served as a respected figure off the field. At the team banquet, he received the “Unsung Hero” award for his senior-season leadership.

“It’s something I’ll always remember,” he said. “It felt good knowing that I might not have gotten the (playing) outcome I wanted, but at least people saw I put effort towards what I wanted to do, not just for me but for the team.”

Playing sports at State High can be a challenge. Because the talent pools are deep for all sports, some student-athletes who might start at a smaller school battle for minutes as reserves.

But Albegiani’s experiences, like those of senior Emily Dry on the girls’ volleyball team, provide a reminder that student-athletes can find personal fulfillment and contribute to a program’s success in ways never reflected in box scores.

“We don’t all have to be stars,” Lady Little Lions volleyball coach Chad Weight said. “It takes a lot of different pieces to make it work.”

Albegiani was first inspired by one of his mother’s friends.

The friend, who helps a food drive in a small local town, told Albegiani how crucial the donations were, especially around the holiday season.

“She was saying Thanksgiving and Christmas are the worst times of the year,” he said. “I was thinking, ‘Well, State College Food Bank must be going through the same thing.’ ”

That spurred another thought.

Once he made his decision, he sought extra hands. After all, he was part of a team. Lintal liked the idea first; so did school administrators. Then, with Lintal’s approval, he enlisted his teammates.

At practice, he told them that every year, residents generously supported the program’s door-to-door fundraising campaigns.

Teammates jumped on board. They helped spread word, posting flyers he had made for a donation game. The day before the game, Albegiani and a team captain, Doug Swoboda, plugged the drive on air at several local radio stations to garner support.

“Everybody was willing to help,” Albegiani said.

They hoped to fill a van, and they met their goal: 387 pounds of donated food brought to the game, enough for 322 meals.

“It made me feel good — not the fact that State College football’s name was on it, or my name was on it,” Albegiani said. “It was that 322 people got helped by that, and it was because of us …. It was the team that made it grow.”

A smaller, but no less meaningful, triumph came when a discouraged friend wanted to quit the team. Standing on the sideline, he felt he was wasting his time, but Albegiani helped him see otherwise.

“Something I’ll always remember is I talked to him and I was saying, ‘These are experiences and memories. If you quit now, you’re leaving a whole season of memories you won’t ever replace,’ ” Albegiani said. “You might go home after school, which might sound nice, but you won’t remember in 10 or 20 years that you went home.”

Lintal said he has been proud to watch Albegiani mature as a leader who could inspire others. He called his reserve quarterback “a tremendous young man.”

“I think he’s a big part of the culture we’re trying to create at State College in general and on the football team — of doing the right thing,” Lintal said.

Albegiani made the right move late in one game, keeping the ball and darting through an unexpected hole into the endzone after his number was called on fourth and goal. “Coach, you don’t know how good that felt,” he said to Lintal, who rushed on the field with a big hug.

But years from now, Albegiani will treasure many other moments that didn’t elicit cheers — an ongoing game with a teammate while running sprints, the camaraderie on long bus rides, the satisfaction of leading the scout team in practice and preparing the starting defense, the friendships made.

Sure, he wanted to play more, but he’ll always have more than stats to savor.

“Being part of the program, it’s an experience I’ll never forget for the rest of my life,” he said.

Emily Dry has started a few matches as a defensive specialist, and she’s tasted success, most recently with the 14-7 district champion Lady Little Lions who bowed out in the first round of the 2015 state playoffs.

But she knows what she’ll remember the most fondly from her playing days:

“By far, I think, my team, meeting all the people I’ve met, even on the other teams through clubs,” she said. “I’ve met a lot of really amazing girls, and coaches, and coaches of other teams. I’ve honestly come to have some of my best friends because of the sport.”

Age hasn’t mattered, she said. This past season, for instance, she befriended two freshman as a mentor, a program her coach started to build team chemistry. The tips were simple at first: be sure to wear the right jerseys to practice, stash extra socks in the locker, bring snacks to ease post-workout hunger pangs.

Then the advice turned to school and life.

“They started coming to me for stuff outside volleyball, which I valued,” Dry said.

She volunteered to be a mentor because she once looked up to one — a State High player two years older who managed Dry’s middle-school team and then looked out for a nervous freshman.

“It was just nice coming into high school and having this girl, who had already played, take me under her wing so I didn’t have into a group of girls I didn’t know,” Dry said. “For me, it changed the way I thought of (joining the team), so I wanted to do that for girls who were younger. I know how it was as a freshman, and how scary it was.”

Coach Chad Weight said Dry’s willingness to counsel teammates, along with record of working hard in voluntary summer practices and workouts, indicate a deep commitment to her team and the sport.

Dry said she still keeps in touch with her former mentor, who’s now in college.

“I talk to her daily,” she said. “I hope I keep that connection as I continue.”

Of course, she’ll look back on a few court triumphs. There were the times, typically against weaker opponents, when Weight placed her and other shorter defensive players at the net for a spell, just for fun. Teammates would serve them ball after ball, and one led to a unforgettable spike for Dry.

“I went for it and it hit the ground (on the other side),” she recalled. “Everybody was just standing up. It was the most exciting thing. We were like screaming and jumping up and down.”

She did that also from the bench, joining teammates to come up with “crazy cheers” during critical matches. But quieter moments stand out also, such as knitting a scarves for teammates during two-hour bus rides.

Some of the best times had nothing to do with volleyball, like the day last season when the team met for community service and make little Christmas cards to accompany Meals on Wheels dinners. After a while, the players grew bored of writing the same generic greetings and started googling little jokes and riddles to add instead.

It’s hard to say what the recipients thought, but the writers certainly got a kick out of the whole thing.

“We thought that was the funniest thing in the world,” Dry said. “We made thousands. We just kept making them because we thought it was funny.”

All in all, Dry is glad she stuck with volleyball despite wishing at times for more chances to play.

“I definitely think coming out of this whole thing, I’m a more well-rounded person than someone who started,” she said.

“I’ve learned a lot of life lessons, which probably some of the normal starters wouldn’t have. I learned you can’t always have what you want; sometimes, it’s not meant to happen. Other things are more important than playing time.”