Rudy Burruss: “I want every child to know how much they matter” 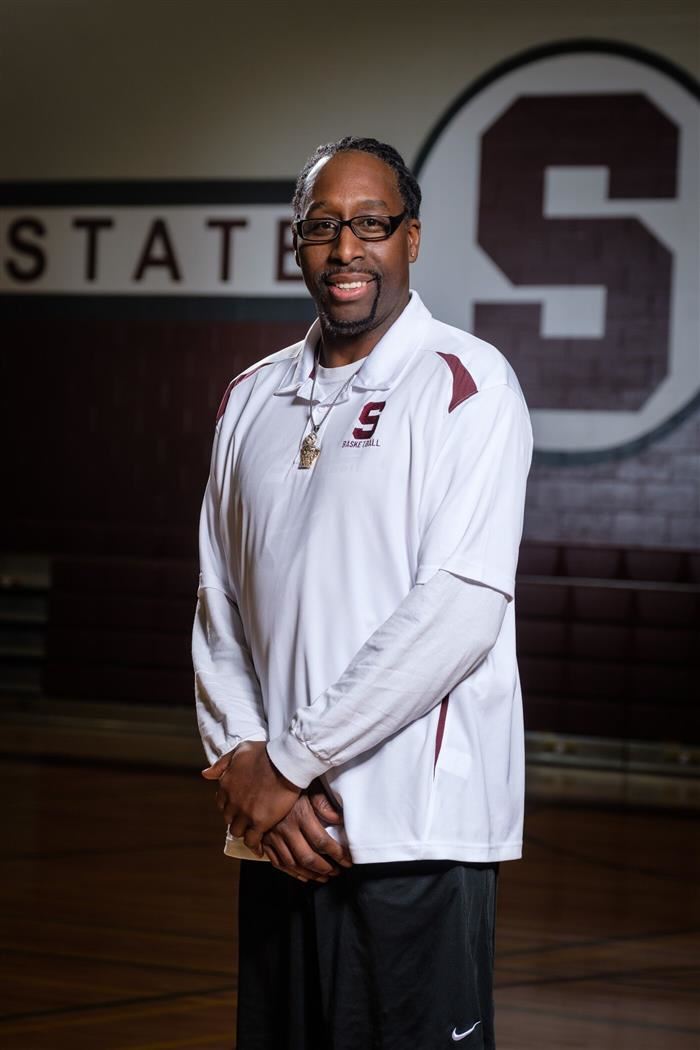 Congratulations to Rudy for his recent nomination and approval to the upcoming class of Maroon & Gray Society inductees.

It’s 1988, and Rudy Burruss is starring in a Reebok commercial. He’s the Wizard, playing up the middle for the Harlem Globetrotters, wearing the fiercest pair of Reebok hightops on the court. He doesn’t have his signature dreads — yet — but his magnetic personality is immediately recognizable.

Rudy says that those days of traveling with the Harlem Globetrotters were exciting and fun, but his biggest memories are not of the places he visited, or of the crowds. “It was the kids,” he said. “I got to be with kids for two hours every night, and hear their excitement and have fun with them. I realized how much I loved that, and that I wanted more than just those two hours. I wanted to spend every day with them.”

Eventually his travels brought him to State College where he applied for a job as therapeutic staff support (TSS) to assist children with special needs. TSS workers are employed outside the school, and are supposed to only help the child they’ve been hired to assist, but Rudy says that the teacher in his classroom was an “all hands on deck” kind of teacher and kept asking him to jump in to help others.

Again, he wanted more. “Instead of just helping one kid, I could be in the school helping a lot of them,” he said. So he became a special ed paraprofessional — a job he’d hold for the next 21 years. A job he calls ‘a godsend.’

“I’ve been able to work with these kids who learn differently, and make sure that they are accepted in school, and they are socialized. I am the one who is 100% real with them, and tell them that I value them. I make sure other kids understand that they are just like everyone else, and that they matter.”

“State College Area School District has the best Special Education Program ever,” he added. “I’ve been to other schools and talked to the kids. It’s just not the same. Everyone cares here. We’re not doing it to get rich — we really love working with these kids.”

With the same drive that pushed him on the basketball court, Rudy found himself rising within paraprofessionals, first in the local union, then at the state level. He soon found himself involved at a national level. In 2015, he was elected as National Education Association (NEA) State Director, where he lobbies on the behalf of Pennsylvania students. In his new role as ESP Region President, he represents educational support staff like janitors, secretaries, paraprofessionals, bus drivers and nurses aides from 453 schools across the state.

“When I was elected last April, I knew that it would take me out of the classroom, but didn’t know how much I would miss being in school,” he said. “I miss being with the kids most of all.”

Just as he was adjusting to his new job away from the kids he loves, he was diagnosed with not one, but two kinds of cancer. It’s a diagnosis he’s fighting, with his new wife Theresa beside him, and his community surrounding him.

A gofundme set up in his honor has more than doubled its goal and is still growing. The girls’ basketball team hosted a fundraiser game for him. “Holy cow,” he says. “I never expected this level of support. I looked at the list of people who have given, and I just cried.”

“I never thought I had the impact that I’ve had — I just wanted to be good at what I did — a black man who did it the right way. I didn’t know I made that kind of impact.”

“When I was first diagnosed, someone told me to buy a basket to hold the cards I’d get in the mail. A basket! I need a big trunk to hold all the cards I’ve gotten! I just can’t even … it’s amazing.”

Today, Rudy is in Collegeville, about 40 minutes from Philadelphia. He’s just minutes away from the medical center where he gets his daily cancer treatments. “The people are fantastic,” he says. “But I miss State College.”

One thought on “Rudy Burruss: “I want every child to know how much they matter””