A New Home for the “Old Iron Kettle” 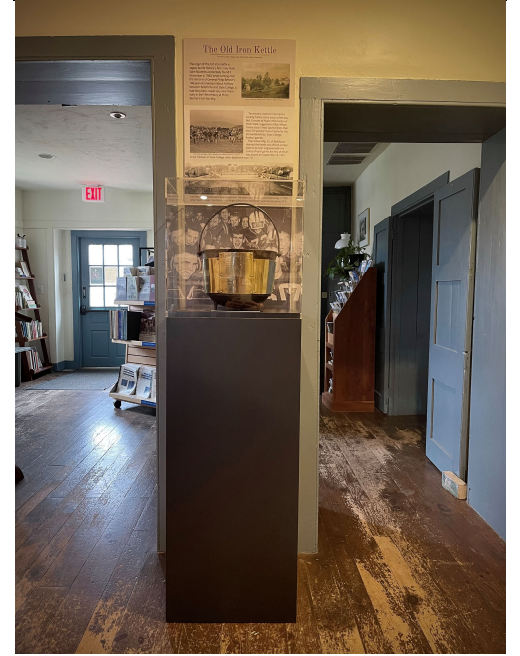 The Centre County Historical Society recently announce that the State High Alumni Association has donated the legendary “Old Iron Kettle” to be displayed in the Hearth Room at Centre Furnace Mansion. The Kettle was the coveted trophy from the intense Bellefonte‐State College football rivalry from 1941 to 1972.

Tom Smith, a State High 1950 graduate and Alumni Association Director– citing “The Battle of Benner Pike: A History of the Bellefonte‐State College Football Rivalry” by Ralph Gray – explained that two unidentified Penn State students found a rusted kettle in 1940 while hunting near “Rock,” the location of what remained of Philip Benner’s 148‐year‐old mansion. The Kettle was likely made at Philip Benner’s “Rock Iron Works” foundry.

The Kettle’s insertion into Centre County history came about when Lou Bell, then Director of Public Information at Penn State, suggested to Bob Wilson, Centre Daily Times Sports Editor, that the CDT sponsor it as a trophy for the annual Bellefonte–State College football games. Titan Metal Mfg. Co. of Bellefonte cleaned the Kettle and affixed a brass plate to be later engraved with the scores of each game, the first of which was played on September 19, 1941, in “the Hollow” in State College, when Bellefonte won 7‐0.

Smith said the Iron Kettle series had a few breaks over the years and ended unceremoniously in 1999 when State College – by then a much larger school than Bellefonte – won the last game, 62‐0. The Old Iron Kettle is now on display at Centre Furnace Mansion at 1001 E. College Ave. in State College.